I met Greg (aka Jimmi Riggz) at the 10@10 hip hop night I went to last month. After Greg’s set was over he made is way over to the bar and my table wasn’t far off. So I jumped up started to chat with him and told him about this blog, to my surprise he said he had heard of it! I asked him if he would be up for a quick interview and he was down. My conversation with Greg had a lot of laughs which made it one of the most fun interviews to date :). Here’s what Greg AKA Jimmi Riggz had to say.

1. Alright so what’s your name ?
My real name is Greg and my stage name is “Jimmi Riggz”.

2. So where are you from ?
Originally I’m from Dundas, Ontario and I moved out here 6 years ago and I’ve been in Calgary pretty much ever since.

3. Why did you move to Calgary of all places ?
Well originally I moved to Jasper and then it was like, your not going any where, your having fun but your going any where. (laughter)

4. Do you like living in Calgary ?
Ya, I like it for lots of reasons. You know obviously works good and then the (hip hop) scene’s pretty good for the most part. And I like it because it’s close to mountains and all that jazz. So like if you wanna get away for the weekend your just an hour or 2 away from dope spots.

6. So if you had to describe Calgary to someone what would you say ?
I would say it’s a good spot. If you want to get away from your whereabouts and want to meet likeminded people it’s the perfect spot to go because 90% of the people you meet are not from Calgary and at some point in their life, in all our lives we have the same thought of “Hey I need to get out of here”. So in that way when you meet someone you almost have something in common with them right away. So you meet a lot of nice people who at one point in their life where in the same mentality as you, which I like.

7. What else do you think the city has to offer for someone just coming to the city for the first time ?
Well theres great opportunities, I mean if your looking for work there is plenty of that. There’s good schools, there’s U of C, there’s SAIT . . . (pause), Ummm, I don’t even know the rest, I didn’t even go to school here man (laughter).

8. So how did you hear about this night and how did you get involved with it ?
Well I heard about it awhile back and I don’t know, I got at Beni cuz I seen videos on youtube and whatever and just heard it was a good place to meet people, network and I don’t know, some real (hip hop)heads that are into music here so I thought why not check this place out. Then I was talking with Beni and they don’t get very many turntablists through here so he was on board to have me out, so here I am.

Random Guy: Yo! You put on a good show buddy!

Greg: Thanks man, thank you.

Rob: Haha why ? Why didn’t it happen ? You got scared ?
Greg: I dont know, I think we got drunk. (laughter)

Greg: You don’t have to put that in haha.

Rob: No I’m definitely gonna put that in! (laughter).

Thanks taking the time to talk to me Greg! And that guy who interrupted the interview was right, you put on a good show! 😉

A DJ friend of mine (Mista Wilson) set up an introduction to Ryan through his friend Marie. I met Marie and Ryan in front of the Ubu Lounge a little before people starting showing up for a hip hop night that Ryan and his friends put on. Ryan told me a little bit about the night and showed me around the venue quickly. After a quick look around Ryan and I went back to the street to conduct our interview. Here is what he had say!
* A few more photos from the night follow the interview.

1. Where are you from?
I’m from Calgary

2. Have you lived here all your life?
I was born in Calgary

4. What is it about Calgary that you like?
Well, like, even with a lot of other Canadians too who are like born and raised somewhere else, like, there’s a lot of nostalgic feeling for the place where you were born, and the place where you are familiar with , like most of my friends.  For me that’s Calgary.

5. What do you like to do for fun?
I like to listen to music, watch sports, chill with the hommies.

6. So you are putting on this night.  Why don’t you tell me a bit about the night that we are at? How did it start?
It started as an idea from my boy Rock Media about creating a night where we invite 10 local hip hop acts down to do quick sets and kinda like a sign up and open mic format.  And it started with that and the way it grew from that point which is just kinda natural within itself.

7. How long have you guys been doing this night?
I believe this is our 24th month or 22nd month? I’m off on that one so I don’t know

Around there, if that (Laughter)

9. How long do you plan to do this night?  Is it gonna be a long standing thing?
Um, you know at this point…It’s not even the foresight, you know.  We never even thought it’d be this long. At the same time, it’s hard to envision local hip hop without it.

10. So what else is happening in the City as far as the hip hop community goes?
I don’t know, but from 10 @ 10 being a hub, it’s kinda nice to see like, as you invite more artists down to perform, it’s different artists meeting other artists, and different visual artists meeting other visual artists or photographers meeting artists as well, ya know. And then seeing the collaborations even from the events.  Seeing, you know, an act from one month, with an act from a different month doing a song together and your seeing kinda like those kinda fruitations of the culture. It’s showing more growth and you know than whats within the realm of my reach.  Cause there could still be great stuff being created anywhere, but if I’m not hearing it is it my hip hop or no?

11. So how do you get the acts?
People who attend kinda see what we’re doing and how it’s being done.  And they send us an e-mail at 10at10showcase@gmail.com or they hit us up on twitter @10at10calgary.  And then we ask them to send us a set list some links to their media and they we just kinda go through the email list.  And we do try to give everyone an opportunity to perform, so at all levels we encourage people to send music in.

12. Alright cool. So if you had to describe Calgary to someone what would you say?
It’s hard to describe, because I’m not even a travelled guy too much.  I travelled a little bit and it really opened up my eyes about what the world is like.  But Calgary’s just like, Midwest, big city with small town hospitality and that’s pretty much it.

13. Is there anything else you can think of that you’d like to add, that people might want to know about your night?
Since the conception of this, we’ve actually ran this free of charge for almost over a year and a half now.  So it’s just here to develop the hip hop community of Calgary.  We’re just creating a place where people can practice their craft, promote their craft, and diversify their collaborations coming out of their own art.  So come on down.  Tell your friends who are talented, we don’t have to all be bedroom rappers and producers and not you know, create something as a city.

* Thanks for taking the time to talk to me Ryan! I’ll see you next month 😉 Also, thanks to DJ Mista Wilson & Marie for the introduction to Ryan. I would also like to add that I stuck around for a couple hours to check out the night and it was super good and had a lot of cool people attending. 10@10 is definitely worth checking out! 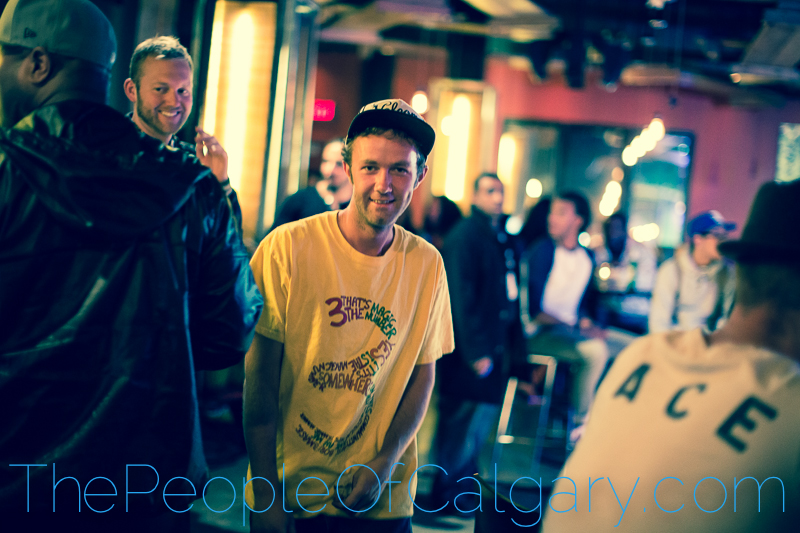